Delirium Prism is the second limited edition of the Delirium (The Lost Decks) from Giovanni Meroni and Thirdway Industries.

The crazy scene on the front of the tuck box depicts the Delirium King giving a speech, surrounded by his guards and his consorts.

On the back there is a scene with the Delirium Gods of War.

Spades and Clubs are blue and green, and Hearts and Diamonds are red and orange.

The tuck box is made with prismatic stock and is inner printed, embossed and with a custom seal. Printed by Expert Playing Card Co. with Master Finish.

Delirium is chosen as the official 2015 deck of the United Cardists forum.

The first deck of Thirdway Industries funded on Kickstarter.

Delirium is strongly inspired by the classic french playing cards, making it perfect for cardistry and magic.

The Lost Decks will be printed in USA with USPCC, and will have a lot of different features compared to the first “Prism” version: new backs, new cards and new boxes. 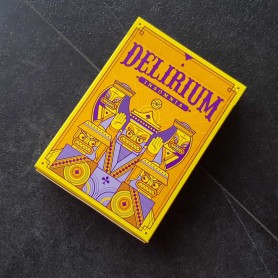